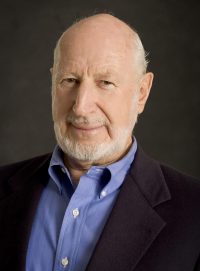 Norman Abramson is Professor Emeritus at the University of Hawaii. He has served as Professor of Electrical Engineering, Professor and Chair of Information Science and Director of the ALOHA Network at UH. Abramson received an A.B. in physics from Harvard College in 1953, an M.A. in physics from UCLA in 1955, and a Ph.D. in Electrical Engineering from Stanford in 1958. He has been a member of the faculty at Stanford, and a visiting member of the faculty at Berkeley, Harvard and MIT.

Abramson is the recipient of multiple awards for his work on random access channels and the ALOHA Network, the world’s first wireless data network. Among these awards are the Eduard Rhein Foundation Technology Award (Munich, 2000), the IEEE Alexander Graham Bell Medal (Philadelphia, 2007) and the NEC C&C Foundation Award (Tokyo, 2011). The ALOHA channel and subsequent modifications are utilized in all major mobile networks and in almost all two-way satellite data networks. In a way, all mobile phones in operation today say “ALOHA” every time they are used, as the first packet transmitted is sent using an ALOHA random access channel.